UK is third best country in Europe to get a job, Glassdoor report reveals

It’s easier to get a job in some countries than others, and it turns out that the UK is near the top (along with Estonia, Norway and Austria) when it comes to job prospects. According to a report out today from Glassdoor Economic Research, the UK labour market has some major advantages including the quality of the workforce, high levels of education and training and low levels of temporary employment.

In the new Glassdoor economic research report, conducted in cooperation with Llewellyn Consulting, titled “Where Is The Best Country In Europe To Get a Job?”, Glassdoor set out to identify which countries offered the best job prospects and why. The study, spanning 16 countries in Europe, presents an analysis of eight key employment indicators including rates of unemployment, temporary employment, involuntary part-time working and the “employment gap” (comparing current employment rates with the pre-crisis rates).

“On the one hand, countries like the UK, Germany, Austria and Switzerland enjoy below average unemployment. By contrast, Greece, Spain and Portugal have continued to struggle with double-digit unemployment and slow economic growth—partly due to inflexible labour market regulations that have proven difficult to reform in recent years.” 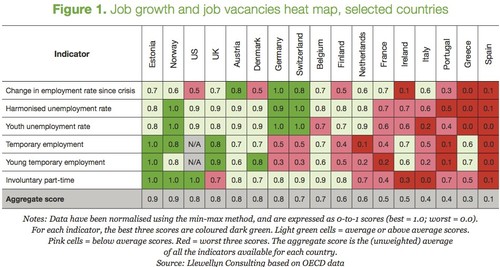 UK has one of lowest rates of unemployment in Europe

Unemployment is particularly high in Greece and Spain (around 25% of the workforce), but the UK is in a much better position, with around 6% of the active population out of work. This rate is only bettered by Austria, Germany, Switzerland and Norway. Norway has an unemployment rate which is less than half that of the European average.

Youth unemployment has reached dramatically high levels in some countries 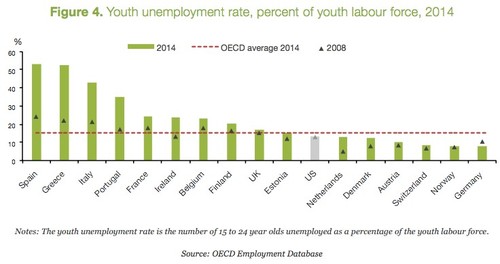 UK and Estonia have lowest proportions of temporary employment

Temporary contracts are particularly common in Spain, the Netherlands and Portugal (all over 20% of employees). In Norway, the proportion is just 8%, the UK 6% and Estonia 3%. Among young workers, the numbers on fixed-term or temporary contracts are even higher than general employees, again particularly in Spain and Portugal. The UK and Estonia have the lowest proportion, by quite a margin. 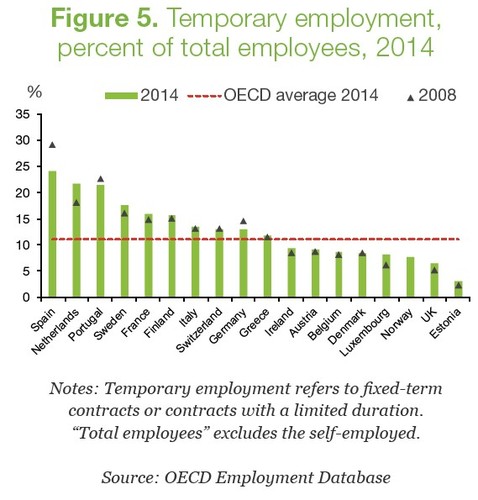 The employment rebound has been best in Germany

The “employment gap” compares current employment rates with the pre-crisis (2008) rates. The most impressive employment rebound has been in Germany (2.8% points) and only in three countries (Germany, Austria and Switzerland) has employment yet risen to above its pre-crisis levels. The UK comes in fifth, just behind Estonia and ahead of Belgium.

The gap is largest in Greece (-10.8% points), Spain, Ireland and Portugal.

Involuntary part-time work has increased in most countries

The proportion of those who work part-time but would rather be working full-time has increased everywhere (with the exception of Germany, Belgium and Sweden) since 2008. The proportion is highest in Italy (12%), Spain (10%), and Ireland (9%), and lowest in Austria, Switzerland, Belgium, Luxembourg, Norway and Estonia. The UK is in the middle of the pack at over 4%, which is above average.

Only 5% of CEOs in the UK, US and Canada’s biggest listed...

53% of CEOs predict decline in economic growth rate in 2020