A new, multi-country, study from Glassdoor has identified the reasons behind the "unadjusted and "adjusted" gender pay gap between men and women in the United Kingdom, United States, Australia, Germany and France.

The report, titled Demystifying the Gender Pay Gap, is based on a unique data set of more than 534,000 salary reports, shared on Glassdoor by online employees, which includes pay data down to specific job title and company name. This specificity has enabled Glassdoor to understand both the “unadjusted” and “adjusted” pay gap in each country.

The unadjusted pay gap between men and women in the U.K. is 22.9%, meaning women earn, on average, 77p for every £1 men earn. When adding statistical controls for age, education and years of experience, Glassdoor data show the gap compresses to 15%. When additional controls for occupation, industry, location, year, company and job title are factored in, the pay gap in the U.K. becomes 5.5%, revealing the adjusted pay gap. The study found similar differences between the unadjusted and adjusted pay gaps in each country analysed. 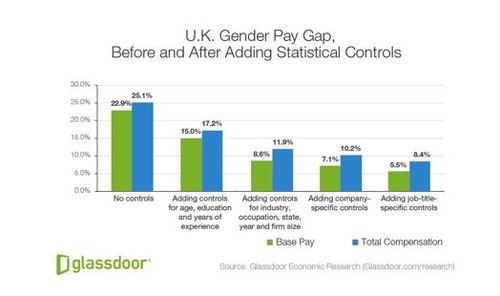 “While our report reveals a significant gender pay gap, it’s important to understand there are multiple ways to analyse this gap. Glassdoor’s unique compensation database allows us to closely examine the factors that help explain some of the documented differences in pay between men and women and shine a bright spotlight on the portion of the wage gap for which there seems to be no explanation.”

To better understand the causes of the gender pay gap, the study divides the overall gap into what can be “explained” due to differences in worker characteristics (e.g., age, education, etc.) and what remains “unexplained.” Glassdoor researchers found that the majority (64%) of the overall U.K. pay gap can be explained, while 36% of the overall pay gap cannot be explained by any factors observable in Glassdoor data. Glassdoor says this means the unexplained pay gap may very well be attributed to workplace bias (whether intentional or not), negotiation gaps between men and women and/or other unobserved worker characteristics.

The study reveals that the largest contributing factor to the gender pay gap is explained by differences in how men and women sort into occupations and industries with varying earning potential. This finding is consistent across all five countries, and in the U.K., it makes up more than one third (38%) of the unadjusted gender pay gap. Other third-party academic research suggests the occupational sorting of men and women is due partly to social pressures that divert men and women into different university degrees and career tracks, and to gender norms such as women bearing disproportionate responsibility for child and elderly care, which pressures women into more flexible jobs with lower pay. Less of the gap is explained by gender differences in education, age or years of experience (26%).

Chamberlain added, “Women and men tend pursue different career paths early in life and then sort into different industries and occupations, which, in large part, is due to a variety of societal expectations and traditional gender norms. This is the single largest factor we see contributing to today’s gender pay gap.”

Dawn Lyon, vice president of corporate affairs of Glassdoor, Inc., commented, “To help close the gender pay gap, we should focus on creating policies and programmes that provide women with more access to career development and training, such as pay negotiation skills, to support them throughout their lives in any job or field they choose to enter.

“Greater transparency around pay can also help eliminate pay gaps by making it easy to identify disparities and spark conversations with employers to ensure people are paid equally for equal work. Research has shown that companies that embrace salary transparency can also improve employee satisfaction in the long run, which boosts productivity.”

Another recent study conducted by the Equalities and Human Rights Commission has found that three out of four working mothers have been hit by pregnancy and maternity discrimination.

The study of 3000 mothers revealed that they were not told about promotions, were denied training or were even threatened with dismissal.

It was also revealed that only one in four women affected by discrimination raised it with their employer and fewer than 1% went to an employment tribunal.

Caroline Water, deputy chair of the commission, said, "We want to make workplaces fairer and get rid of outdated practices like asking women during job interviews whether they intend to have children."