Angela Mortimer has hosted the first in its series of 40th Anniversary events.

Themed ‘Post Brexit Britain’, the event was held on Wednesday 27th July at the Courthouse Theatre in Soho, London.

Group chief executive, John Mortimer, opened the seminar to around 100 delegates and acknowledged the wave of negativity surrounding the vote, but reassured the audience that the purpose of the seminar would be to highlight the value of the British brand abroad and also discuss potential options for our clients to explore when planning for ‘Post Brexit Britain’.

Lead speaker for the seminar was Professor Jeremy Baker of ESCP Business School; a Stanford educated affiliate professor with particular expertise in corporate strategy and globalisation.

Mortimer declared surprise at the sense of shock around the vote quoting figures from as recently as autumn 2015 that indicated the British public would only vote to remain if then Prime Minister, David Cameron, was successful in his bid to renegotiate with Brussels. He closed his introduction by posing the questions, ‘What changes do you want for your company?’, ‘Do we want to be like Norway or Switzerland or even Canada?’ and ‘Who is going to lead us through this period of change?’, before inviting Professor Baker to the lectern. 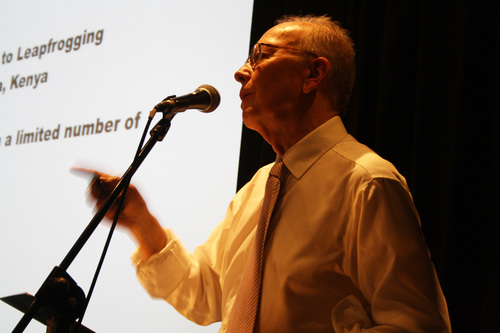 Professor Baker began by assuring the audience he was not to take a political stance or suggest the result of the vote was right or wrong, and then supported a point Mortimer had previously made, suggesting issues that received significant airtime and column inches in and around the referendum had been bubbling away for years, and that we mustn’t be surprised at the ‘feeling’ from outside of the capital city that ultimately shifted the vote in the direction of Boris and his Brexit.

Baker referred to the result as a ‘historical moment’ and one that shouldn’t be taken lightly, advising that big changes would likely affect jobs, clients and business models. Focus then turned to lobbying and the importance of individual groups getting what they require from a re-negotiation.

Citing financial services and farming as two industries particularly good at lobbying on their own behalves he stressed the importance of the HR community finding its voice within this ‘historical moment’.

He said the banks will always be pandered to as they create wealth that funds other industries, and farmers do so much to not only cultivate and protect ‘England’s Green and Pleasant Land’ but also in terms of produce and exports. He asked, how will the HR community compete? You must become the ‘Head of Brexit’ within your organisation, analyse the risks and be prepared for all eventualities, define what exactly it is your organisation is great at, as ultimately that is what will determine its survival and progression during this ‘historical moment’ of change.

Professor Baker turned attention to a potential ‘Soft Brexit’ scenario, which both he and Mortimer agreed was the most likely outcome for Prime Minister, Theresa May, and her new government, suggesting the idea of fully walking away from Europe was a bit of a non-starter due to the intertwined nature of both our cultures and supply chains.

During this segment he did, however, make a point to highlight Britain’s entrepreneurial capabilities and that we rank a meager #2 in the world only behind the Swiss.

The ‘Soft Brexit’ scenario was again touched upon during the post seminar Q&A, when a member of the audience asked Professor Baker whether or not he thought Article 50 would actually be triggered.  He expressed skepticism, suggesting that whoever it is that presses the button, whether May or someone else, would be catapulted immediately into the history books by triggering something just below the nuclear bomb in terms of significance.

Following Baker’s session, Mortimer took to the stage again to thank Baker and to summarize his points.

He reiterated the result of the vote was due to two decades’ worth of unresolved and largely un-discussed issues: the fear of immigration, the fear of technology, the fear of the unknown and also decline of middle class incomes.

That said, he added, the changes we are likely to see wouldn’t be imminent, giving us all time to prepare for the eventualities, have our voices heard and also pin down exactly what it is our organisations are great at and why they will remain relevant.

UK faces massive job losses – but we should not extend fu...