The pay divide between engineers in the North and the South of the country has narrowed since the financial crisis, according to an analysis by Brookson.

Brookson says that despite mega projects such as Crossrail pushing up demand for railway engineers in London and the South East, engineers in the North have seen demand for their skills rise in sectors such as aerospace and automotive, which have benefitted from rising worker productivity and export-led growth. 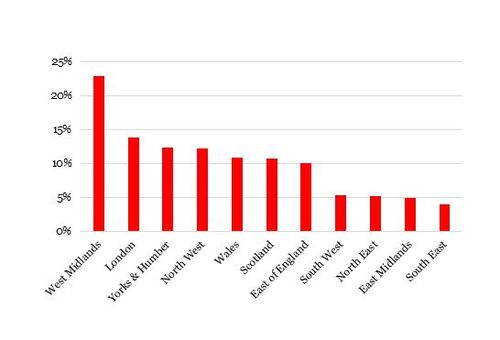 ​Martin Hesketh, managing director of Brookson, commented, “Demand for engineers in London and the South East tends to be dominated by mega projects such as Crossrail, which are publicly funded and focused on the domestic market. The North has seen a boom in the aerospace and automotive sectors, aided by the devaluation of the pound which has boosted exports.

“The increased availability of export finance, together with government export credit guarantees, has allowed many engineering and manufacturing business to win contracts overseas that they might have struggled to secure previously. UK carmakers achieved record exports last year, with the Nissan plant in Sunderland leading the way.

“As ever, skills shortages threaten to put the break on the accelerating exports of the UK automotive sector. Companies are reporting difficulties finding design and production engineers, and are making greater use of contractors to plug skills gaps.”

Brookson says that shortages of engineering skills are reportedly greatest in the West Midlands as the automotive sector, including companies such as Jaguar Land Rover, post record sales and ramp up investment and production.

Hesketh commented, “There has been a surge in demand for engineers in the West Midlands as carmakers continue to increase output. In many cases, they are recruiting engineers from their supply chain, which is triggering bidding wars as suppliers seek to retain skills. The big carmakers tend to get the skills they need, leaving those businesses lower down the supply chain struggling.

“The talent pipeline isn’t being replenished fast enough to keep pace with demand. The number of engineering apprenticeships being created in the West Midlands has been in decline over the past few years, and has only started to recover in the past year. This is forcing growing numbers of engineering businesses to recruit from overseas.”

Brookson points out, however, that engineers who operate through their own companies tend to be on average more experienced and/or have higher value skills. They also pay less tax than​ full-time​​​ ​equivalents, which means that their take-home pay is a higher proportion of their gross income. ​