With a 6% decrease in jobs month-on-month, October employment opportunities stand in stark contrast to the post-Brexit alarmist rhetoric. Hakan Enver, operations director at Morgan McKinley Financial Services, said, “There’s a tendency to blame everything on Brexit these days, so it’s encouraging to see that businesses haven’t stopped recruiting.”

In light of the announcement of over 20,000 redundancies by banks across mainland Europe, the figure is all the more reassuring, according to Morgan McKinley. Enver stated, “It’s normal to see these types of layoffs about once a year, but it appears that London was spared in this round.

“The much feared recession has failed to materialise”.

Supporting the analysis was news from the Office of National Statistics (ONS) that the British economy grew by 0.5% in Q3, exceeding expert forecasts. "There is little evidence of a pronounced effect in the immediate aftermath of the vote”, the ONS said about the improved economic outlook.

Though not drastic, a 14% month-on-month decrease in professionals seeking jobs is unusual for October, when the half-term break usually frees up time for people to research new professional opportunities. Enver commented, “It’s been a long, arduous year full of uncertainty, so we’re seeing people’s appetite for job-seeking subside. Most have begun the wait for New Year’s bonuses early.”

Conflicting data have complicated analysts’ efforts to project the employment climate ahead. The falling pound, which reached a 31 year low, was the worst-performing currency in the world in October. Though it rebounded in response to news that the government would not be able to bypass Parliament in Brexit negotiations.

The currency free fall was paired with a historic spike in the FTSE 100 index, although one point shy of its peak of 7,122. Enver said, “There’s a data tag of war going on, but market confidence is a strong indicator of jobs volume, so the stock market rally shows that people have confidence in British businesses and are investing in them.”

Though the High Court’s ruling is not expected to derail the triggering of Article 50, the requirement that Parliament approve the terms of Britain’s exit from the European Union is expected to dampen Prime Minister Theresa May’s zeal for a hard Brexit which, according to a leaked Treasury report, could cost the British economy £66 billion year.

In its EU exit negotiations, Morgan McKinley says that the Government has proven reluctant to take into account the significance of the City of London to the British economy. The reluctance has, at times, verged on hostility, worrying those whose businesses and employment depend on the preservation of passporting rights. Enver commented, “The opportunity for a more transparent and less hardline exit is good news for City employers and workers alike.”

The loss of passporting would deal a blow across the board, but Enver cautions that the booming fintech industry is likely to take a disproportionately greater hit. He added, “It’s unrealistic to expect one nationality alone to have the requisite expertise to cater to the complex needs of the fintech industry. Passporting is essential for the ability for institutions to continue to attract the best and the brightest to work in London.”

Further buoying proponents of a soft Brexit was the announcement by Mark Carney that he will stay on as governor of the Bank of England through the Brexit process. Carney’s steadying hand is expected to contribute to less contentious EU divorce proceedings, and to calm market anxieties.

Enver stated, “Many European cities are continuing their charm offensive, but unless there’s a hard Brexit, they shouldn’t hold their breaths for draining the City of top talent.” Enver cited linguistic and cultural gaps as the biggest relocation barrier for job seekers, and the City’s financial services infrastructure as the biggest relocation barrier for institutions themselves.

The City’s resilience was not constructed overnight. October marked the 30 year anniversary of the so-called Big Bang, when the City of London was deregulated. In the thirty years since, London grew into an international financial services powerhouse. Many believe the infrastructure that came about in its wake have made the City Brexit-proof.

Indeed, were Britain to pursue a softer Brexit in which Britain would remain in the single market, the City of London would likely survive Brexit largely unscathed. Enver commented, “London’s financial services sector is unique among its European counterparts. Without legislative and structural reforms on the part of the recruiting countries, they won’t be able to absorb the industry.”

With the election of Donald Trump to serve as the next President of the United States, markets are expected to enter a period of volatility as his policies crystallise. According to Princeton economists Alan Blinder and Mark Watson, “The performance of the stock market between Election Day and Inauguration Day might be taken, in part, as a statement of investor confidence — or lack thereof — in the incoming administration”. This means it’ll be all eyes on stock exchanges in the months leading up to the January changing of the guard in Washington.

During October 2016, the average salary change was 17%. This meant that a financial services professional leaving one organisation to go to another could, on average, secure a 17% salary increase. This figure has remained steady since July of this year, which suggests that institutions are generally hesitant in offering extravagant packages to entice people across. 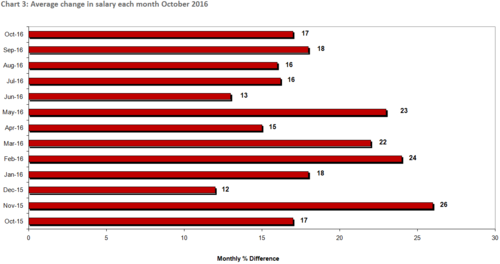