EU workers’ appetite for the UK jobs market is cooling dramatically, according to new data from Indeed.

Since the start of 2017, the number of people in other EU countries searching online for UK jobs has slumped by 18%. The drop is the sharpest recorded since the UK voted for Brexit last June, and takes the number of inbound job searches to 11% below its post-referendum trough.

Meanwhile traffic in the opposite direction is increasing, with the number of UK residents looking for work in other EU countries ticking up since the start of January.

As the table below shows, the number of Europeans looking for British jobs fell in the wake of last June’s referendum and again after October’s “Hard Brexit” announcement. But the 2017 decline has been sharper and longer than both previous dips. 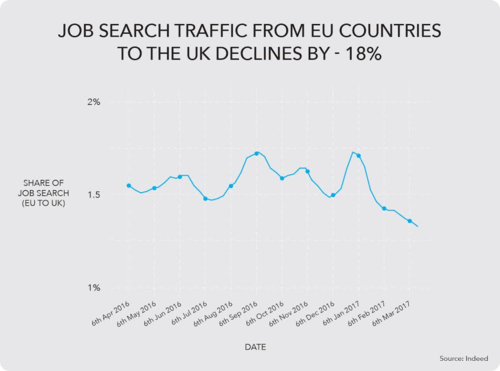 Mariano Mamertino, EMEA economist at Indeed, commented, “As Article 50 looms, we are seeing a sharper and longer decline in interest in working in the UK than in previous ‘shock drops’ following last year’s referendum. As Brexit moves from rhetoric to reality, the strain on Britain’s strong but tight labour market will worsen.

“For better or worse, a British labour market with fewer EU workers will be immediately confronted with a range of complex questions that will need to be resolved quickly to prevent major disruption.”

A separate Indeed analysis of official ONS data reveals just how reliant the UK has become on EU workers. It found that one million jobs (44.3% of all new jobs) created in Britain since 2008 were filled by people born in another EU country.

The dependence is most acute in the manufacturing and hospitality sectors, which together account for a quarter (26%) of all EU nationals employed in the UK.

Mamertino added, “Such heavy reliance on European talent could prove a serious liability if Brexit interrupts the flow of workers. With Europeans’ appetite for working in the UK already on the wane, if a non-EU Britain puts up legal barriers to EU workers coming here, or if the UK economy slumps in the wake of Brexit, European jobseekers won’t hesitate to look elsewhere.

“UK unemployment is already at its lowest level in four decades, and with a shrinking pool of available talent, many employers face extreme competition when recruiting the people they need to grow.