A growing proportion of contractors working in financial services are seeing their pay increase and are being offered longer contracts as the market rebounds following the initial Brexit shock, according to research by SJD Accountancy.

SJD Accountancy says that other metrics point to demand for contractors rebounding following the initial shock reaction to the Brexit vote. The percentage of contractors on a contract of at least one year or more has edged upwards over the past year, indicating that end users are no less committed to long-term projects than they were before the vote. 34.7% of contractors are on contracts for one year or more, up slightly from 33% in the last six months of 2015.

Derek Kelly, chief executive officer of SJD Accountancy, commented, “Demand for contractors in financial services remains resilient despite the pain felt in the immediate aftermath of the referendum, when the number of contracts reduced, as well as the rates paid to some contractors.

“Financial institutions have stepped up demand for change management professionals as they look to transform and respond to the challenges thrown up by Brexit. Contract business analysts, project managers and programme managers are highly sought after in the financial services sector at present.

“Many financial services businesses slowed hiring prior to the referendum vote. While the form Brexit will take is still uncertain, contractors represent a lower risk option than full-time employees.”

The research also shows that the proportion of financial services contractors earning £500 per day or more has edged up slightly, from 60.7% to 61.6%.

Kelly concluded, “Contractors are more vulnerable to the vicissitudes of the market than permanent employees. With economic growth revised upwards and unemployment at the lowest level since 1975, we may see an increase in opportunities for contractors as employers struggle with short-term skills gaps.” 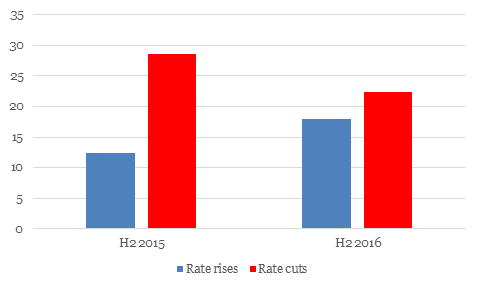