Morgan McKinley has released its London Employment Monitor for May 2017.

Jobs held steady with a 0% change in either direction, month-on-month. The lack of movement suggests a flattening out of the job market as businesses await the outcome of the general election. Though much of the campaign has centred around Brexit, proposals by Labour Party leader Jeremy Corbyn to push for a series of new tax increases has emerged as potentially even more consequential for London-based businesses.

The financial services industry contributes nearly 12% of the government’s total annual tax receipts, making it a crucial component of Britain’s economy. Enver commented, “Brexit forced financial services institutions to draft plans for leaving the City. Draconian tax hikes at home may just force them to put those plans into action."

An 11% year-on-year decrease in jobs is more modest than in previous months, raising hopes that the sharp year-on-year downward trend might be drawing to a close. “Employers are telling us that they’re no longer factoring Brexit into their hiring decisions,” said Enver. “They are working with what they have, not what may or may not happen in years to come.”

Professionals seeking jobs were up 14% month-on-month but down by a precipitous 42% year-on-year. Enver stated, “Job seekers, unlike institutions, are not waiting for election results to make their next move. They’re optimistic about the City’s jobs market.

“The year-on-year drop in job seekers reflects the fundamental shift of the City’s job market as non-British professionals continue to either leave for more secure markets, or cling to their existing job until they get more clarity about their right to work in the UK.”

Since taking up residence on Downing Street, Prime Minister Theresa May has enjoyed an at times rocky relationship with the financial services industry. May sought to put lingering concerns about her commitment to the City to rest by discussing her vision of the Square Mile, saying that “the role that the City plays in supporting [EU] economies and their businesses and also the fact that it has taken many years for the City to build up those expertise, to build up that ecosystem [and it] can’t be done by somebody else at the drop of a hat.”

In the interview, May went to great lengths to assure a wary financial services sector that she not only understands its needs, but also that she intends to fight to ensure that those needs are met, both in terms of negotiating the best possible trade deals for financial services, as well as ensuring that institutions can continue to hire the best employees irrespective of national origin.

Enver stated, “In speaking directly to the City of London, Theresa May showed both her deep understanding of what’s at stake for the City, as well as her commitment to protecting City jobs.

“I think the message will go a long way to soothing anxious City nerves.”

A new report by S&P Global Ratings mirrors May’s sentiments. It projects that despite remaining Brexit uncertainty, untethering itself from the EU will open the door for more economic opportunities that are currently not open to the UK. “There is a real opening for UK business to develop closer trading relations with faster-growing non-EU economies. This will play to the British economy’s strengths, by focusing on faster-growing, technologically advanced, value-added manufacturing and services,” said the report. 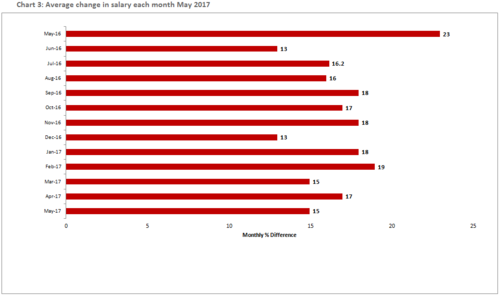 If London’s economic prowess is waning post-Brexit, you certainly couldn’t tell from what’s happening on the ground. Tech giant Google announced details of its £1bn compound to be built in Kings Cross. “When you have a global tech leader like Google expand its operations, you can be guaranteed more innovation and investments will follow,” said Enver.

The sentiment is shared widely across the board. London-based venture capitalist Eileen Burbridge called London “the place to start and grow a fintech business.” A Silicon Valley transplant, Burbridge acts as the Treasury’s fintech envoy. She predicted that cybersecurity will be “biggest sub sector in financial services,” but does not expect fintech growth to be limited to only that sub sector.

The World Bank revised its forecast for Britain’s economic growth in 2017. In January, the Bank projected a growth rate of 1.2%, but has now upgraded the estimate to 1.7%. The number is roughly similar to 2016’s growth rate of 1.8%. The upgrade came as a result of increasing evidence that the British economy is withstanding Brexit uncertainty, and is well positioned to adapt to the needs of a global marketplace.

Enver concluded, “Britain is defying the odds thanks to an agile and robust business sector, which is all the more reason to ensure that the government puts growth and jobs at the forefront of their agenda.”