Revealed: Best European country to be a female health worker

The NHS may be under immense strain but the United Kingdom is one of the best countries on the continent to be a female health professional, ranking sixth in a study of 30 European countries.

Lenstore analysed six metrics including average working hours, annual salary and holiday allowance and found that France leads the way ahead of The Netherlands and Finland as the country with the best opportunities for women in the industry.

The research, which highlights that females in the health sector earn an average of £7,038 less than their male counterparts across Europe, also reveals that Dutch female health professionals have the lowest weekly working hours (25) and an average salary of £38,471.

Perhaps surprisingly, the UK has lower working hours than many of the top 10 countries, with an average of 33 hours a week for females in 2019.

The study also scrutinises the percentage of women in the industry, the number of female doctors and how many students are currently reading medicine. The UK ranks fourth overall for the number of female trainee doctors with 33,574 (compared with 24,365 males). However, the figure was some way short of France, where there are currently 109,489 women studying medicine – more than double that of second-placed Spain (50,499).

Switzerland boasts the highest-paid female health professionals, with an average salary of £65,718, but despite the second lowest working hours (29.4) it only ranks 11th overall. Bulgaria has the lowest average annual salary of £6,445.53, placing it firmly in the bottom three above only Cyprus and Malta.

Top 10 best countries overall to be a female health professional 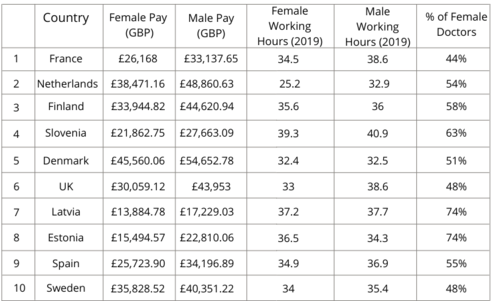 As well as boasting the highest number of women studying medicine, France also sees females in the health profession enjoying an average 34 days’ holiday per year – the second highest behind Slovenia (35 days).

However, France and the UK still have a large gender pay gap. A female working in the UK health and social care sector earns an average salary of £30,059, compared with their male counterparts who earn an average salary of £43,953, a discrepancy of 32%, while France fares a little better at 21%.

Romania has the best gender equality in the health sector, ahead of Hungary and Serbia.

“Our health services across the globe have become immensely important over the last 12 months since the Covid-19 pandemic, as millions have relied on them more than ever before,” said Roshni Patel, Lenstore Optometrist and Professional Services Manager. “With the heroic work of nurses and doctors inspiring many to pursue a career in the industry, it’s important to consider the opportunities and gender equality women can expect.

“With the NHS being at the crux of the UK health sector, it’s great to see the country ranking as the sixth-best place in Europe to be a female health professional. The country has a particularly exciting future in the industry for women due to its high figures of females studying medicine at the moment. Whilst the Covid-19 pandemic continues to unfold into 2021, it’s important to consider the best places to pursue a career in the health profession as a woman.”