HR professionals in the UK are taking home an average net salary of just £23,584, six per cent below the standard average salary of £25,123. However, HR professionals in many regions have enjoyed strong wage growth over the past five years, which could soon help to redress the balance.

These are some of the key findings from new research by digital coaching provider Ezra, which used Office for National Statistics to compare average net income across each region of the UK with the average wage earned by HR and Industrial Relations Officers.

HR wages versus regional averages
The analysis found HR careers lags behind other sectors in all parts of the UK except in the North East, where the average HR professional currently earns £22,483, two per cent higher than the regional average earnings of £22,106.

The South East and East Midlands are also home to some of the largest HR pay deficits, with a -16% difference between average earnings in the sector and the wider average income for both regions.

There is also a double-digit drop between the average regional earnings and the average earnings of HR professionals in the West Midlands, South West and London.

However, it’s not all gloom and doom. In many regions, HR salaries are on the way up. The North East has seen the biggest increase in the average rate of HR pay over the last five years, with wages up by 15%. The West Midlands has seen average HR earnings jump by 13% in the last five years, with Scotland seeing a 11.4% increase. In contrast, average HR pay in the South West has dropped by 16.8% since 2015, with the East Midlands (-4.5%), South East (-3.8%) and Wales (-1.6%) also seeing a drop.

Will HR salaries rise in 2021?
Ezra Founder Nick Goldberg said the findings were surprising given HR was one of the foundations upon which businesses were built.

“The positive trend is that take-home pay of many in the sector has increased over the last five years and this should help address the balance,” he said. “With such drastic changes to the way we work currently taking place across the board, we should see the need for HR increase as businesses look to adjust appropriately and professionally in what is a challenging climate.

“As they do, the requirement for HR expertise to aid in this adjustment should help boost both their value to UK businesses, as well as the salary they are paid for imparting this knowledge.”

HR salaries vs average salaries in the UK
Source: Ezra 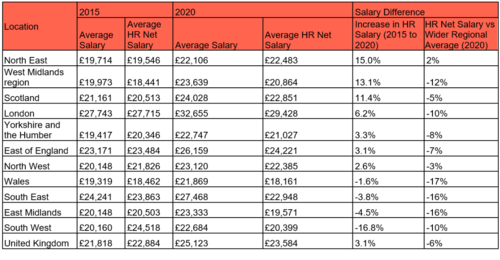 No more ‘industry for life’ for workers