Tech companies, investment banks and consulting firms dominated Glassdoor’s list of the top 25 paying companies in the UK for 2021.

US cloud-based software firm Salesforce climbed into top position this year, with employees receiving an average package worth £100,000. The company was the fourth highest payer last year.

UK investment manager Man Group was a new entrant this year in second place, offering average compensation of £93,620. US consulting firm Kearney was the third highest payer with a £90,661 average.

Big name tech companies such as Facebook and Spotify also featured on this year’s list, but Microsoft dropped out of the rankings despite having come in third last year.

There were eight investment banks on this year’s list, along with seven tech firms, five consulting companies, two finance firms, two banks and one insurer.

“If salary is your key motivating factor, then head for the big names in banking, consulting and tech, which still dominate when it comes to large salaries in the UK. Companies like Salesforce, Kearney and Standard Chartered Bank are all fighting for the best talent and they are prepared to pay top dollar to get it,” said Amanda Stansell, Data Scientist at Glassdoor.

“Bankers have always received pretty significant bonuses since successful traders can bring huge company returns and tech salaries in particular tend to be high because of a shortage in specialist skills such as data science and software engineering.”

Glassdoor compiled the list using data provided by employees between March last year and February this year. To be considered, companies must have received at least 30 UK salary reports during the period. 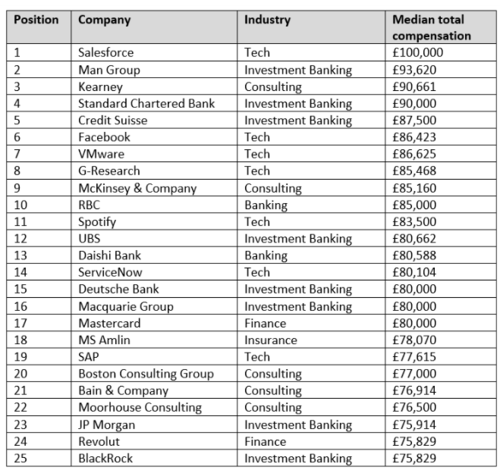 The anonymous employee review website considered the total compensation package, including base salary and other forms of compensation such as commissions, tips and bonuses in devising the list.

Pandemic leads to more workers having a side gig