The construction industry is the most dangerous area to work in thanks to the need to work at  height, heavy loads and live machinery, but workers are at least being compensated financially for the risk.

That was the finding of a study by GoCompare Life, which analysed Health and Safety Executive data on workplace fatalities during the past five years and cross-referenced these with Adzuna data on average salaries.

Its analysis found that the construction industry accounted for 17.1% of all deaths at work in the UK, but commanded an average salary of £42,090 per year.

Farming and manufacturing were the next most dangerous industries (see table below), while real estate was the highest paid of the risky industries, with an average salary of £53,837. 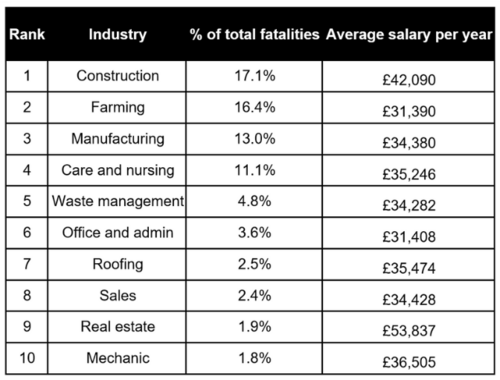 The most common cause of workplace fatalities was falling from a height at 32.19%, followed by being struck by a moving vehicle (22.2%) and deaths caused by moving objects (19.98%).

The data also found that men were far more likely to die at work than women, with males accounting for 97.3% of all workplace fatalities.

There were no deaths among workers aged 16-19 and those in the 20-24 age group accounted for just 7% of total workplace fatalities.

Certain parts of the country appeared to be riskier than others, according to the research (see graphic below). 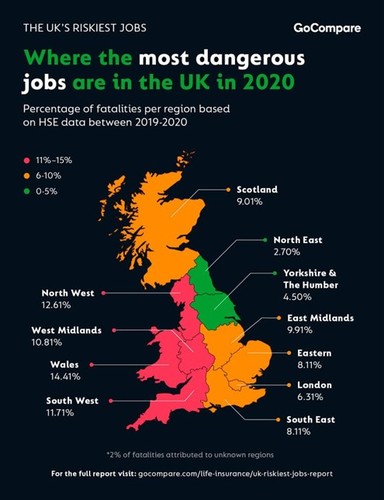 Wales had the highest percentage of workplace fatalities at 14.41%, followed by the North West at 12.61%.

The safest place for workers in the UK seems to be the North East, which made up only 2.7% of workplace tragedies.

Thousands of mini umbrellas ‘stealing’ from workers and t...