The number of age discrimination employment tribunal claims soared last year, with complaints of this type rising more than any other category during the pandemic year.

According to research by over-50s digital community Rest Less, age discrimination claims increased by 74% last year, with the number of claims rising to 3,668, up from 2,112 in 2019.

This was despite the fact that overall, employment tribunal claims decreased last year, falling 1.5% to 180,430.

The figures highlight the disproportionate impact of the health crisis on the over-50s, with unemployment figures rising sharply among the demographic last year. The number of jobless over-50s rose 48% last year, while redundancies were up 79% on the previous year. 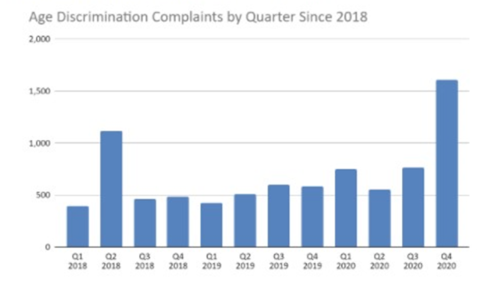 More claims on the horizon

The increase in claims was particularly pronounced in the last quarter of the year and Rest Less said it expected numbers would climb further in the coming months. It pointed out there are still more than one million over-50s on furlough and predicted “a new wave of redundancies may be on the horizon”.

Stuart Lewis, Founder of Rest Less, commented: ‘We know that the pandemic has exacerbated age discrimination in both the workplace and the recruitment process. We also know that once made redundant, older workers are more likely to drift into long-term unemployment than their younger counterparts, raising fears about the sustainability of the UK’s recovery if we don’t have a jobs plan that works for people of all ages.

“Age is a legally protected characteristic, just like gender, ethnicity, religion and disability but yet age discrimination is still widely seen as a socially acceptable form of prejudice. Age discrimination is unfair, unacceptable and has long-term damaging consequences on both the individuals involved and wider society. It needs to stop.”

Patrick Thomson, Senior Programme Manager at the Centre for Ageing Better, added that age discrimination often went overlooked by employers: “We know that age is often the last unspoken and accepted form of discrimination in the workplace. Our recent research with employers finds that while many said diversity and inclusion were important to them, few had strategies or approaches to make their workplaces age-inclusive. We know a third of people in their 50s and 60s feel their age disadvantages them in applying for jobs, higher than any other age group.”

Rest Less used data from the Quarterly Tribunal Statistics from the Ministry of Justice and the Labour Force Survey for its analysis.

Bias still thriving in over half of firms